Talking for eight hours a day presented few problems for Reyabel Villanueva as a young teaching graduate but after taking on a different grade four years into her career, she began to feel the strain on her voice.

“Being in a Kindergarten classroom for the first time this year, I just felt strained and exhausted talking to students all the time,” she said.

“I tend to not take any sick days because I always want to be there for the students, but a lot of my colleagues have said that I also need to be aware of my own wellbeing.”

Reyabel, who teaches at St Michael’s Catholic Primary School Stanmore, now uses a multi-sound doorbell to gain her class’ attention between activities to save her voice. She is one of eight who gave up a portion of their school holidays to attend Sydney Catholic Schools’ (SCS) first advanced voice care workshop.

Though they each see the voice through a different professional lense, both stress importance of teachers being aware of vocal exhaustion.

“Teachers are the marathon runners of voice use along with actors, and very often they don’t take care of themselves in that respect,” Ms Gradwell said.

“Voice is one of the main tools of their trade, so to be aware of vocal hygiene, longevity and variety is important so that they have vibrant communicative voices at all times. We all talk well from birth, but when you are using your voice eight hours a day for something you need to be mindful of different acoustics.” 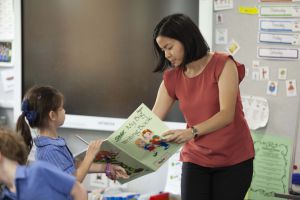 “Not taking care of yourself when you are exhausted or emotionally stressed can also lead to voice issues because you’re living in a state of tension. You wouldn’t push through with other parts of your body if you weren’t feeling well, so why do that with your voice?”

While actors are trained in voice work and tend to be hyper-vigilant about their vocal health, teachers can be left surprised and frustrated when their voices fail.

Cecilia said most of the 20 per cent of teachers who report voice problems each year will push through them rather than seek help.

“We see about 1 per cent, because most will go ‘Oh, that’s just teaching’,” she said.

“It often goes down to poor technique. It could be a lack of good resonance, general overuse, or talking too much when they’ve had a throat infection rather than allowing the voice to rest.

“I often say talking with an injured voice is like running on an injured knee – all you do is make it worse. That’s the beauty of all the support services that are in place in Sydney Catholic Schools. There are facilities for them to do something about it.”

I now have exercises I can do in recess or lunch breaks so that when the next class comes in … my voice is ready.

Consistent with Cecilia’s experience, voice injuries make up less than 1 per cent of of all injuries reported to Sydney Catholic Schools’ wellbeing and Injury management team, yet they can have a significant impact on the individual and their students, colleagues and families.

“Managing a voice injury can sometimes require a period of vocal rest, the provision of temporary alternative duties at work with a graduated return to face to face teaching,” said SCS Staff Wellbeing and Injury Management team leader Allison Edwards.

“In our experience early intervention is the key to minimising the risk of having a vocal injury. Rest after an upper respiratory tract infection such as a cold, advice from a voice therapist as well as voice care strategies are all effective prevention techniques.” 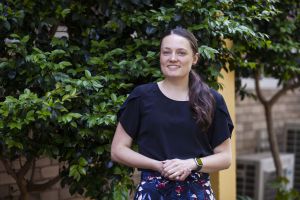 Kelly Scutts teaches commerce, history and geography at All Saints’ Catholic College Liverpool. She completed the workshop after witnessing her sister, a primary school teacher, visit a speech therapist to manage voice problems that came with overuse.

“It made me think about how much I am using my voice every day,” she said. “I thought I’d get some more ideas and techniques here to really preserve my voice and look after it, because I don’t want to have issues later on where I’m not able to speak to my family or teach my students.

“We can talk so quickly that we stop taking enough breath to fuel our voice. Then because we’re not breathing properly, we’re not speaking properly and it just flows on.

“I now have a few exercises I can do on my own in recess or lunch breaks so that when the next class comes in I’m feeling better and my voice is ready.”