The book tells the story of a lonely spider named Tom who sets off on an adventure in search of friendship and learns a thing or two about humans along the way.

Released by British publishing house Austin Macauley in March, the book has been met with widespread acclaim from students and parents alike. 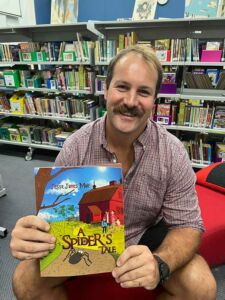 Mr Muir, a former rugby player who plied his trade in the United Kingdom and the Netherlands, began formulating the idea for the book while studying at university.

“I wrote it while I was at university and it was a bit of procrastination,” Mr Muir said.

“I had always wanted to write a book and when I was swamped with assignments it seemed like a good time to do it.”

Spreading the message of empathy

In the book, Tom the spider has set his sights on making friends with the humans who live in the farm house.

But despite his best intentions, he soon learns that humans are not particularly fond of spiders.

Mr Muir said he didn’t plan the narrative or moral of the story before writing the book, rather it came out organically once he put pen to paper.

“It’s essentially about not judging a book by its cover and treating everyone you come across with kindness, whether it’s reciprocated or not” – Jesse James Muir 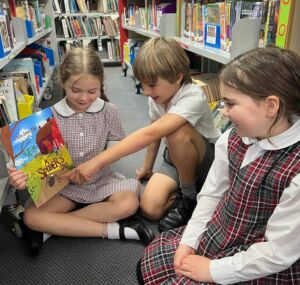 Since its release, the book has received plenty of rave reviews, including getting the seal of approval from those who matter most.

“I’ve been able to share it with my Year 2 class and to the Kindergarteners and they’ve enjoyed it — although probably the most exciting part for them was finding out my full name!” Mr Muir said laughing.

Mr Muir has since written a follow-up to A Spider’s Tale, which is currently going through the illustration process.

“Hopefully that will come out relatively soon,” he said.

A Spider’s Tale is available from Booktopia.