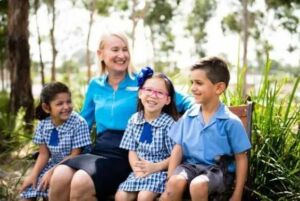 The first two stages of the school were built in 1978 and 1980, at a total cost of $400,000. It was officially opened on 25 March 1979 by the Premier, Mr Neville Wran, and was blessed by the Archbishop, Sir James Cardinal Freeman. Until 1985, it was known as Queen of Heaven Catholic School. The first staff was Sr Edwardine O’Connell (Principal) and a small group of lay teachers. From its beginning St Mary’s School has been part of the system of parish primary schools administered by the CEO, Sydney, which has the responsibility of appointing principals. The school is still a Kindergarten to Year 6 school for boys and girls.