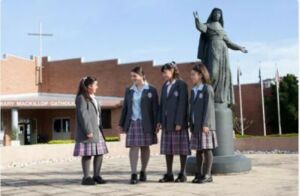 In June 1989, the SACS Board recommended that a new secondary school for girls in Years 7-12 should be built at Wakeley on the site of an abandoned drive-in theatre. This school would eventually replace Our Lady of the Rosary High at Fairfield. In 1991, the first Year 11 girls were enrolled at Our Lady of the Rosary High, Fairfield and in June they moved to the Wakeley site, where Stage One of the buildings had just been completed. On 18 August 1991 Mary MacKillop College, Wakeley was officially opened by Cardinal Edward Clancy. Today the school is still a College for girls from Years 7–12.