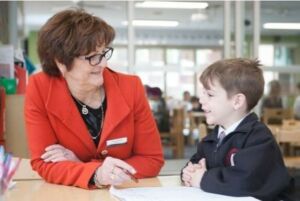 In 1949, Fr Tom Pierse purchased a large old home in Queen Street as the site for a school, and arranged for the Sisters of St Joseph of Lochinvar to staff it. Blessed Sacrament School opened in 1950 in the old home, which also served as a convent for the three Sisters who made up the first community. New classes were added each year until the school reached Sixth Class. The dedicated teaching of the Sisters continued and the school remained under their direction up until 1983 when Mrs Kathy Campbell became the first lay principal with a predominantly lay staff. Today, the school continues to provide contemporary education inspired by the Gospel of Jesus for all children in the community.