The heart of the matter: connecting with charism

Previous
Next
The heart of the matter: connecting with charism
Jill StevenDecember 20, 2018|

Re-working the look and identity of an entire school requires a lot of thinking and discussion.

Uniforms, teaching methods, student wellbeing policies and even physical spaces will all require adjustments. And if the school being remodelled is a Sydney Catholic school, all of these elements will be influenced by a unique spiritual component – a school’s charism.

During the process of announcing Marist Catholic College North Sydney, charism was a frequent topic of discussion.

The new school will combine St Mary’s Catholic Primary School North Sydney and Marist College North Shore to form a K-12 educational precinct, and the college’s charism will be key to every element of its identity. Currently, the two schools celebrate different spiritualities.

“We’ve got four charisms – Josephite, Marist, Mercy and Jesuit,” said St Mary’s Principal Beverly Coffey. “Children like variety, and each one has a different focus and strength you can use to develop the children’s understanding of their faith journey.”

“It helps us to have a good story to connect our students with Jesus Christ and our boys identify with it,” he said.

The process of settling on a spirituality for the re-modelled school, and the thought that went into the choice, is testament to the important role charisms still play in shaping the religious spirit and educational practice of many Sydney Catholic schools.

A spirituality can offer students an example to follow, help them reach out to the poor, give them and staff a common goal, and create a rich school culture. 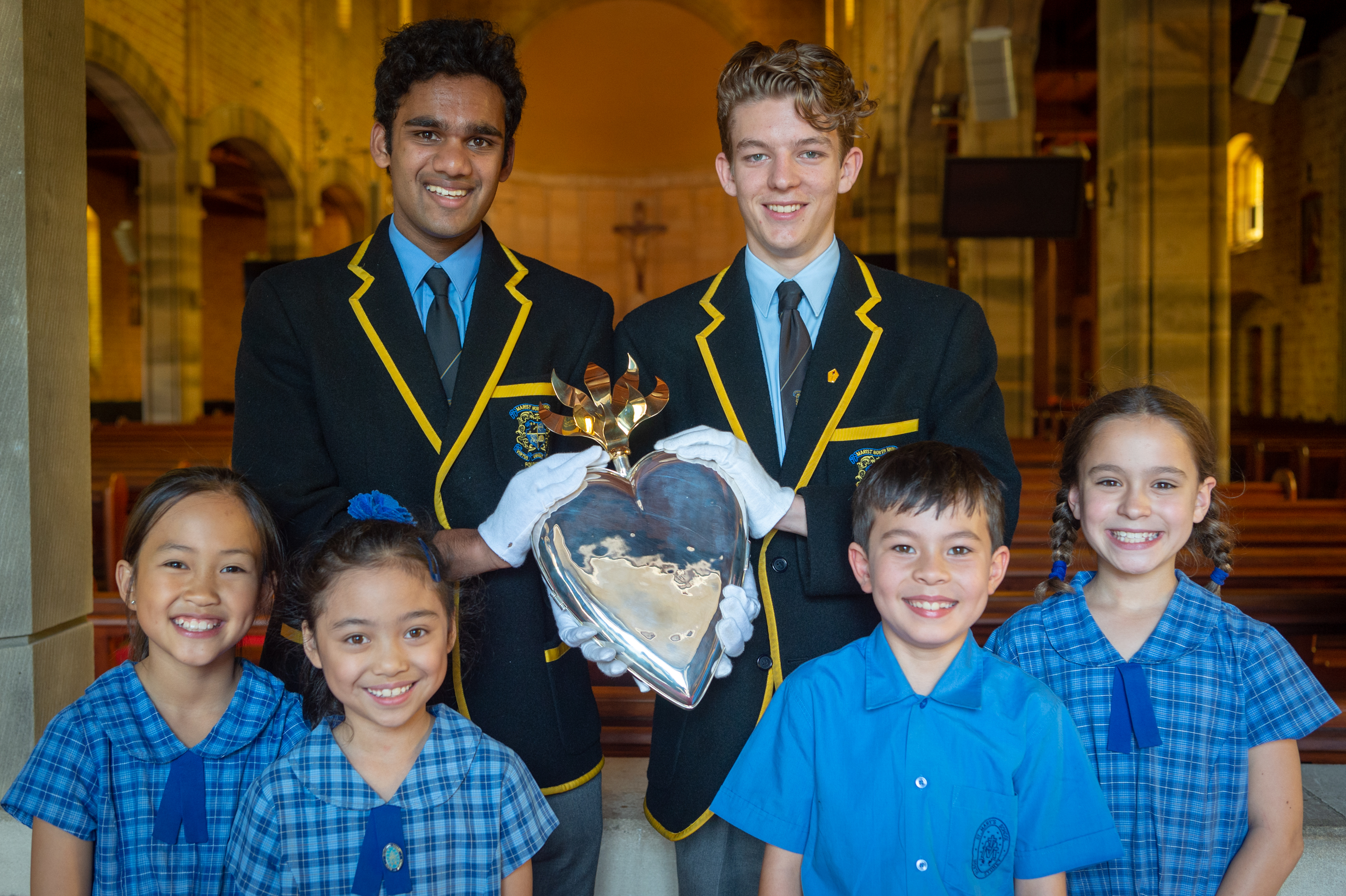 Many Catholic families will be intimately acquainted with the concept of charism. They may have a personal or family charism that guides their spiritual practice, or they may have attended a secondary school with a strong spirituality that they still feel connected to. But for those from other Christian or faith backgrounds, the concept may be completely new and perhaps a bit confusing.

In every case, charisms point to Jesus as the ultimate example, and show a path to follow him better. It can be helpful to think of each as a movement that responded to the needs of a specific culture and time, through the actions of a charismatic leader and those they influenced.

Marist Schools Australia Regional Director John Robinson uses his own Marist charism, which grew out of Marcellin Champagnat’s work establishing schools in the French countryside in the 1800s, as an example of how Catholic spiritualities grow and point people to Jesus.

“Marcellin Champagnat lived in a moment when poor, rural children in France weren’t getting an education, and they didn’t know of God,” he said.

“He was moved by the Holy Spirit to do something about that – and he responded in such a way that people were attracted to his style of living.” 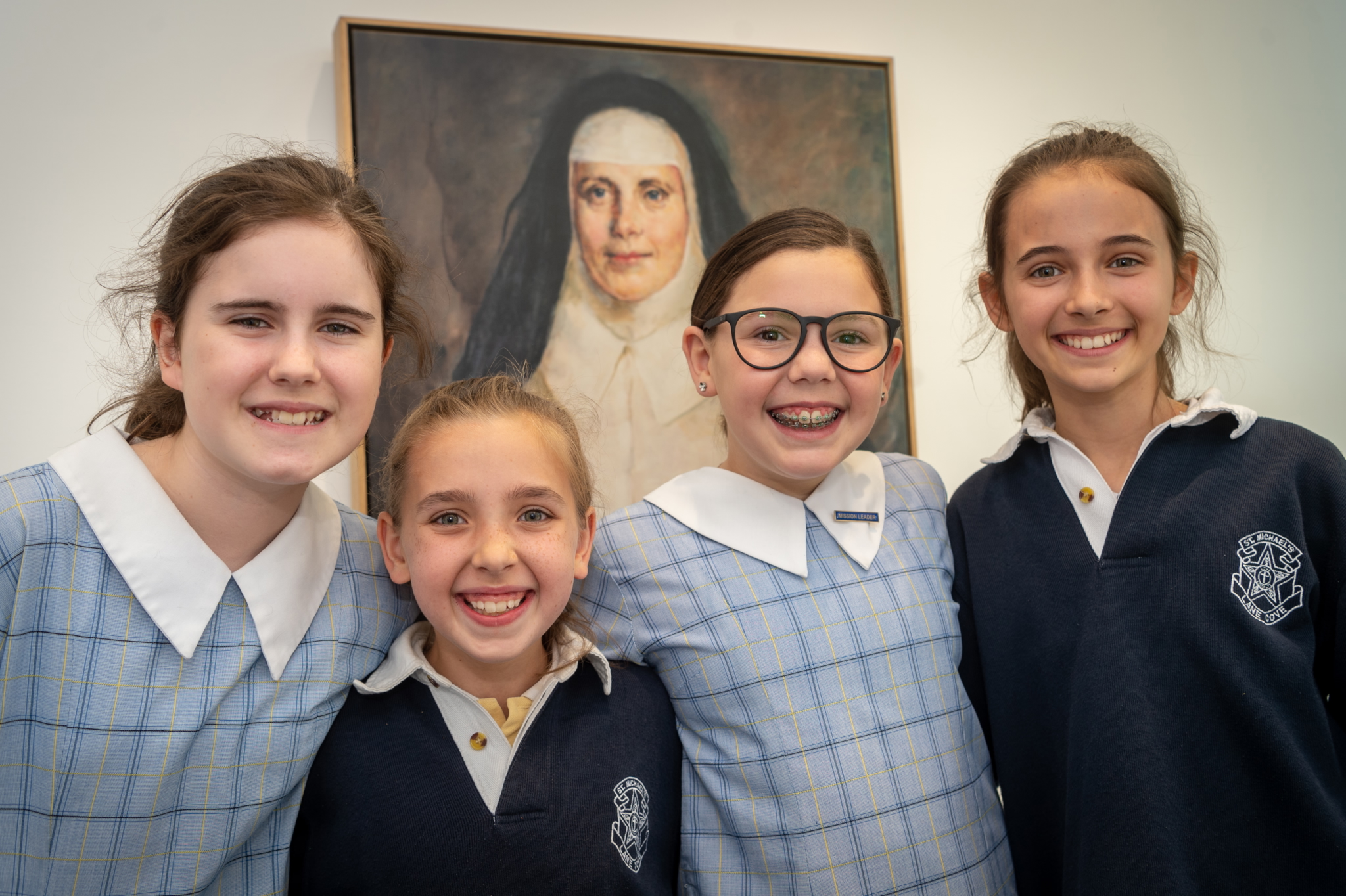 Providing for the poor

In many times and places, physical need for food, water, shelter and education impacts communities. So, it’s unsurprising that many charisms have a focus on caring for or elevating the cause of the poor and vulnerable.

As at many Sydney Catholic schools, students at St Michael’s Catholic Primary School Lane Cove have been inspired by their school’s Mercy charism to gather resources for a diverse range of causes right around the world.

Catherine McAuley, an Irish religious sister, founded the The Mercy sisters in 1831. St Michael’s has worked hard to introduce students to her order’s ‘corporal works of mercy’, which include feeding the hungry, welcoming the stranger, and visiting the sick, in a child-appropriate way.

Liturgy Leader Ciara Corcoran said learning about the ‘corporal works of mercy’ made her North Shore community’s privilege more apparent, and made her want to share what she had.

“A lot of people don’t have as good a life as we do. They don’t even have clean water or food,” she said.

“[Catherine McAuley] helped a lot of people, and that’s what we want to do.”

Students have sold cupcakes to raise money for Sudanese refugees in Uganda, put on a rock concert to support farmers through the ongoing drought, and once a week visit residents at their local nursing home.

When teachers from the school agreed to be part of the St Vincent de Paul Society Night Patrol and feeding the homeless at St Patrick’s Church Hill earlier this year, families donated toiletries and small food items, and Year 6 children spent the day organising thousands of items into 150 packs for the adults to distribute.

The community acknowledges that their zeal also springs from natural compassion and Jesus’ example, but the story of Catherine McAuley has given students practical steps into which they can channel their energy. The liturgy and mission leaders now have so many ideas to respond to needs they see in the world that the school’s Religious Education Coordinator, Graziella Kruk, said it’s impossible to action them all.

“Our charism makes it real for them, because Catherine McAuley was a real person,” she said.

“They can see the good she did and even though there were things that were in her way – there were big blockages in her way all the time, she still went ahead and did what needed to be done.” 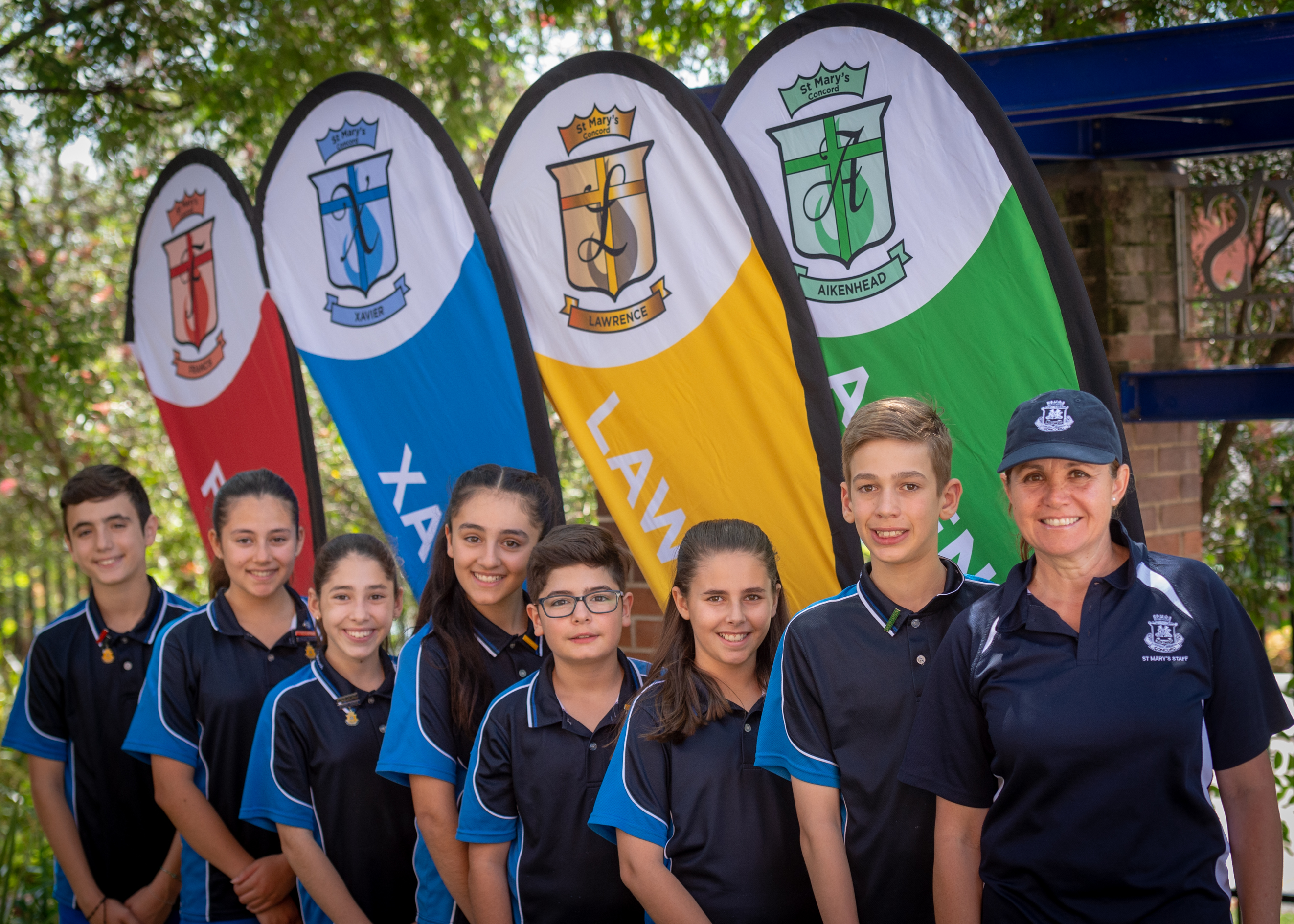 St Mary’s Catholic Primary School Concord are currently at the beginning of re-discovering the rich meaning behind their Sisters of Charity charism, but hope that eventually it can have a similar impact on students.

The school is re-integrating their history into many aspects of their life together, and recently re-branded their four colour houses to bear the names and champion the values of some of their earliest leaders.

“Just talking to the general school population – parents, students, they really didn’t know that we’re a Sisters of Charity school.”

Ms Sriah and PE Teacher Vanessa Di Cecco invited the school’s sports captains to research the Sisters of Charity and re-name the house they led after an early member they connected with.

Getting them involved, they reported, increased ‘buy in’ on the process from their community, and got students talking about the founders of the order and the good deeds they did for the world.

“Reading about all of them, she was the one that stood out as she brought light to the sad, she gave to people in need and she tried the best that she could to follow in the Lord’s footsteps.

“That’s something I try to do as well, so it really spoke to me.”

The school continues to introduce students to their founders through videos and other resources for teachers, and plans to eventually re-name some of their buildings to ensure the sisters are well-known to every student in the school.

Eventually, they hope, the charism will be a part of school life in every way, trickling down to impact everything from curriculum to social justice initiatives. 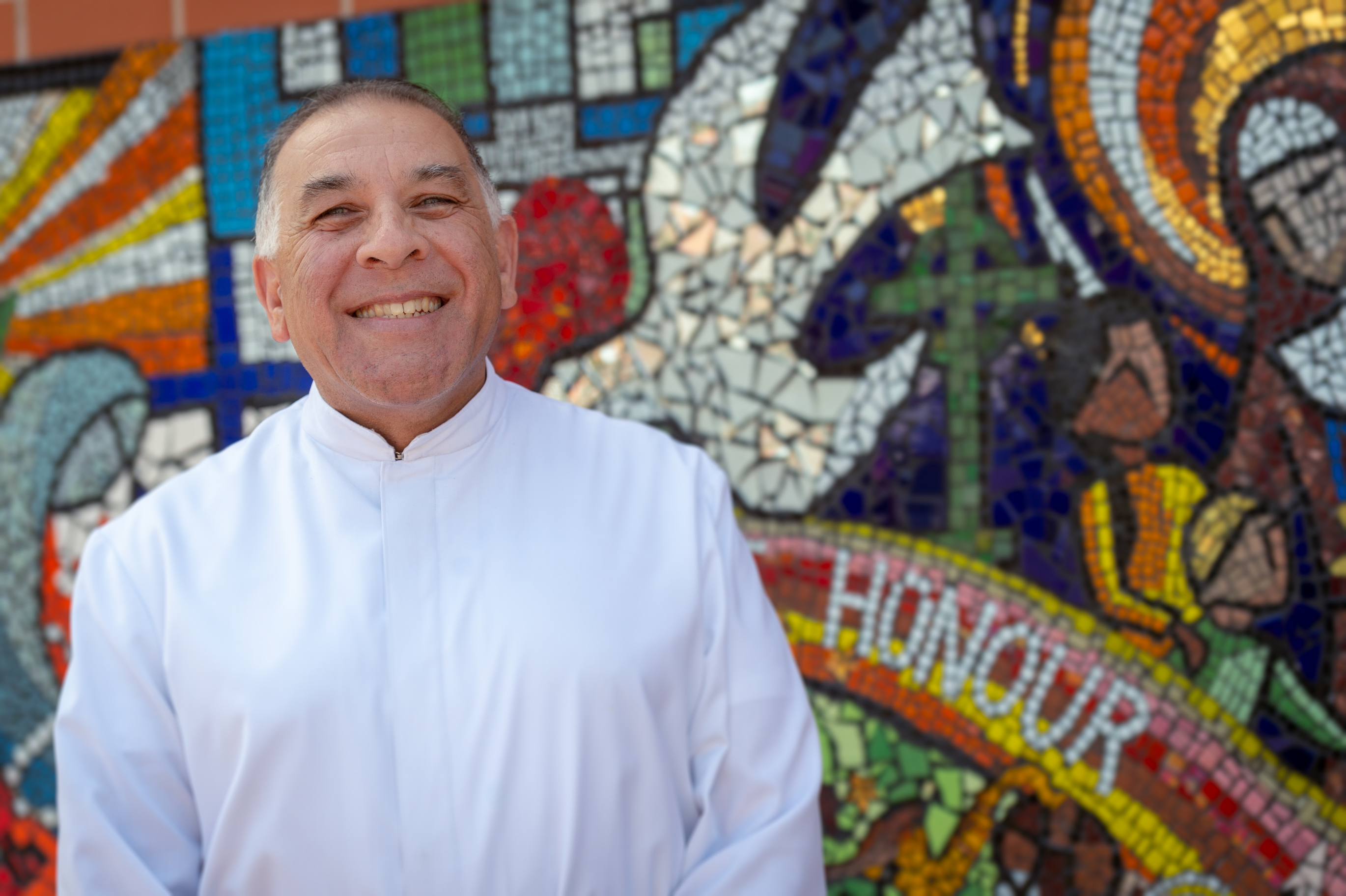 It’s only recently that such deliberate efforts have been necessary to bring charism alive in Sydney Catholic schools.

Traditionally, schools adopted the spirituality of the orders that founded them, or took over their leadership when the government cut funding for Catholic schools in Sydney in 1880.

Orders staffed the schools with nuns or brothers even after funding was restored, and they brought their spiritualities into the school very naturally through prayer, worship and their way of being.

Today, only one religious principal remains within the community of Sydney Catholic Schools: Br Nicholas Harsas.

While students may not necessarily recognise that the culture of welcome he has bought to his role is part of his charism, it’s a key element of the school’s identity, and crucial to his spiritual life.

“From the youngest child in Kindergarten to the elderly grandparent in the playground and everyone in between, the charism of the Patrician Brothers is to see Christ in all,” he said.

“It’s about an option for the poor, it’s about hospitality and welcome, it’s about supporting the people you work with, and it’s about seeing Christ in all people.”

Br Nicholas led OLR to its 90th anniversary this year. But the school actually doesn’t share his spirituality. It’s is a Josephite school, founded on the beliefs of Mary Mackillop.

While this might be expected to create an obstacle, it hasn’t at all. If anything, Br Nicholas’s personal charism and the school’s spirituality have worked together to create something both impactful and relevant.

“What we do for our refugees and the way that we help out families definitely shows Mary MacKillop’s maxim of ‘Never see a need without doing something about it’,” Br Nicholas said.

“If you keep coming back to your charism as one of your core elements of what you do and the way you work with people, it keeps you focused. Despite the challenges and complexities of school life it helps you to find perspective.” 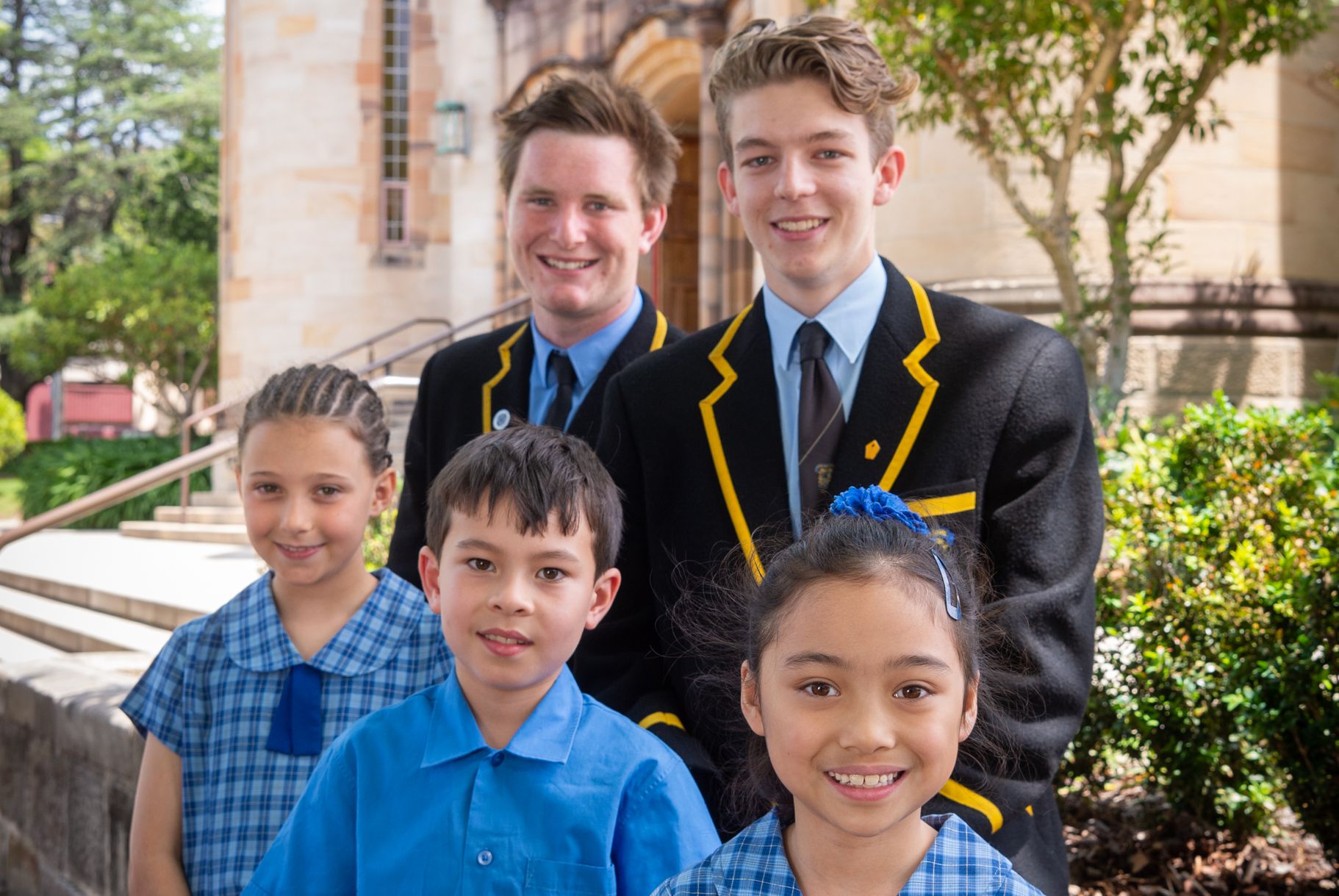 If a charism can do all these things, it’s no wonder those re-working Marist Catholic College North Shore had strong opinions about which charism should lead them into the future.

It might be expected that the decision-making process to choose a spirituality could be contentious, but in the end, the choice was a straightforward one.

The committee chose a Marist charism, because of the strong cultural influence the spirituality’s five central tenets – family spirit, presence, love of work, the way of Mary and simplicity – already in practice at both schools.

As St Mary’s Principal Ms Coffey explained, the choice felt like a natural fit, and it fell into place for her during a conversation with the parish’s Jesuit priest, Fr Andy Bullen.

“He said ‘why would you try and discontinue what’s already been strong through the secondary school and has been a feature in the primary?’ I thought it was so typical of the Jesuits,” she said, adding she was excited to watch her students’ knowledge of core Marist beliefs grow.

Both staff and students are confident that a shared spirituality, particularly one with such a focus on love and inclusion, will build a strong, stable precinct that can create graduates ready to make a difference in the world.

“[Our charism has] personally impacted me quite a lot – mainly family spirit,” explained Marist College North Shore’s incoming Vice Captain Thomas James. “Here at the school I just feel a sense of brotherhood.”

Marist North Shore Principal Tony Duncan is confident that incorporating the spirituality through curriculum and staff development will help unite staff, students and leadership at the new school. He emphasised they will be building on good that already exists to create something new, and even better than the sum of its parts.

“When I see the staff of the primary school I see their family spirit is incredible, and I see simplicity in the way they focus the message of their teaching so well,” he said.

“I think they are such hard working teachers, and I think this charism will work really well.”