Aurora Matchett is a vocal advocate for others with hearing loss, but attending school in another country for six months took the confidence of the once-shy Year 11 student at St Patrick’s College Sutherland to another level.

Aurora is an elected member of the NSW Youth Advisory Council, which guides state government decisions on areas of concern for young people in NSW, and of the YWCA Young Women’s Council – part of a global network that leads economic and social change for women around the world.

When she first started high school, she didn’t want to be seen as different so refused to wear her hearing aids.  With the support of diverse learning teachers at the school and the broader Sydney Catholic Schools network, she has become a peer mentor for younger students with hearing loss at the school and excelled at English and Science through the Newman Selective Gifted Education Program. 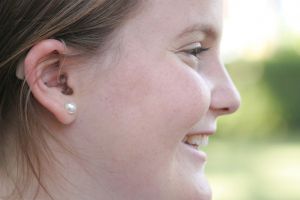 Her self-reliance has grown even more after advocating for her own learning needs while on a reciprocal exchange to Sutherland Shire Council’s sister city Lakewood, Colorado through a grant from Deaf Children Australia.

Between sharing with her new teachers which settings allow her hearing aids to work best and how access to video transcripts and subtitles was helpful,  Aurora experienced a highlight of the trip – hearing the sound of an elk mating call on a visit to Rocky Mountain National Park. Because the call is so soft, she was prepared to smile and pretend she had heard it.

“I was worried about wearing my hearing aids in the snow, but I actually got to hear the call,” she said. “The whole experience of living in another country and having this newfound independence was so good and I’m thankful I had that opportunity to become more confident in who I am.

“When people picture a person with a hearing problem, they often picture someone who can’t speak properly. In my case, that’s not what it is. My disability is invisible but part of who I am. I identify within that deaf culture range so advocating for hard of hearing and deaf community is very important to me. Mum was an influence in that too, because I love the work that she does and politics is a big part of our family.”

One of the main reasons I got involved with the youth advisory council was to give a voice to kids who don’t have a voice.

Aurora’s mother Tracey works on the board of Deaf Sports Australia and for a company that facilitates opportunities in the screen industry for people with disability.

They have also done joint advocacy work, including a video interview distributed to every paediatrician and GP in NSW, when the government canvassed children who had had a significant experience of the health system in 2015 to help form a Charter of Children’s Rights.

Aurora also debated the potential impacts of government budget policy in April at the Australian Council of Social Services’ federal budget breakfast, and has fielded questions from cricket club staff about how best to interact with people who have hearing loss.

“They asked questions like ‘Is it rude to over-enunciate?’” she said. “One of the main reasons I got involved with the youth advisory council was to give a voice to kids who don’t have a voice.”

Aurora’s experience had new personal relevance when Ms Corbin-Matchett was diagnosed with the same pattern of hearing loss as her daughter in May. A family holiday with the reciprocal exchange student showed noticeable enough loss that she booked a hearing test with Aurora’s audiologist. 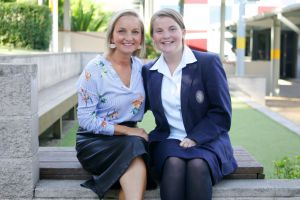 “I had a bit of a cry and she said ‘It’ll be alright’, and then we were laughing,” she said. “She used the same words to reassure me that I had told her.”

Ms Corbin-Matchett said the holistic support Aurora had received from the school’s counsellor and the diverse learning team had been amazing.

“I was happy that Aurora got into the Newman Gifted Education Program because I knew that would support her academically,” she said.

“I was also really impressed that the school was able to introduce me to other supports we could put in place because Aurora was really struggling with her hearing aids and I knew that was compromising her learning. Kids don’t always want to listen to their parents, so it was really great to have that support and direction from someone outside the family to encourage her to wear her hearing aids.

“I work in the disability sector and know there are people who have significant levels of disability who struggle to get support, so I feel very blessed that Aurora does get this holistic support through St Pat’s, who also look out for her emotional wellbeing.”