Next-generation custodians of Aboriginal and Torres Strait Islander culture got a leg-up from their peers and alumnae to help keep traditions alive at the first corroboree hosted by Sydney Catholic schools.

Close to 700 students from 79 Sydney Catholic primary and secondary schools performed dances from Dharug and Wiradjuri nations and the Torres Strait Islands, They had learnt dances that showed respect to native animals and the hunter-gatherer roles of their ancestors at workshops in the morning and were painted with ochre before the main event.

Primary students painted boomerangs to line the dance circle along with eucalyptus leaves at the event held at Sydney Olympic Park on 13 August and emceed by actor and former Marcellin College Randwick student Luke Carroll.

Understanding more of our culture – our performance side, our rituals, our ceremonies – and the diversity of culture was the best thing about the day.

Students cleansed the space with eucalyptus smoke before performing a welcome dance.

“It was done to focus of our connection with the land and our ancestors and was mainly about that purification from anything negative in our lives,” said TJ Pham, a Year 11 student at Freeman Catholic College Bonnyrigg who also sang at the event.

“Understanding more of our culture – our performance side, our rituals, our ceremonies – and the diversity of culture was the best thing about the day. Because we all have one commonality, I think it’s good we understand each other as people but also as people of one great community. No one had their phones on, they had put them away to communicate with one another.”

Corroborees, or aboriginal dance ceremonies, can take a ritualistic or more relaxed form. CaSPA secondary coordinator Elizabeth Mullane said the purpose of the event was to foster identity and develop students’ confidence and cultural pride.

In an era where social media and other technologies amplify questions identity, and mental health providers have recorded rising anxiety levels among teens, the significance of the opportunity to connect with culture is not lost on students.

Brigidine College Randwick new graduate Latasha Te Rangi joined the Murawadeen Goodjarga performance ensemble while in Year 9 and supported the Corroboree by performing and facilitating workshops. She said the event was valuable because of it was inclusive of all indigenous people and customs. 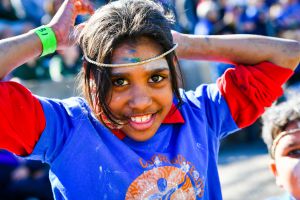 “Goodjarga got me to connect with other people that I never would have crossed paths with if I didn’t go there, and it was confidence building,” she said.

“Because everyone is treated as one, it’s not stigmatised. Your acceptance is not based on what you post [on social media] or anything. Nothing phone-wise is allowed on the day. People are here to see people and connect to spirit and culture.”

“I was the only aboriginal student in my school. For me, having this cultural identity and connection and being able to express it through dance and learning stories – that was really amazing. Now, getting older and seeing what these kids are doing too, I can see the trajectory of reconciliation.”

Ms Kearney said the link to identity and culture at school level was important.

“We know that first nations people need a voice to be quite loud and clear,’ she said. “It’s not just one voice, it’s a lot of voices coming together because we’re not just one culture, we’re 250 different groups from across the country.”

“Helping kids to get in touch with their own identity is very important, to give them a place in this world they are living in and that can be a bit confusing for them at times,” Mr Quirk said.

“This is the oldest civilisation in the world, and that’s something to be proud of. They’re finding archaeological evidence of it that now dates back to more than 60,000 years ago. These kids are part of that and they should be able to shout about it, not cringe from it.”