Historical records show the blessing of the infants’ school and the inauguration of a magnificent Church dedicated to St Therese took place on Sunday 28 January 1940.

The school was expanded in 1951 to include a new presbytery and convent to accommodate an increase in post-war enrolments of local and immigrant families. 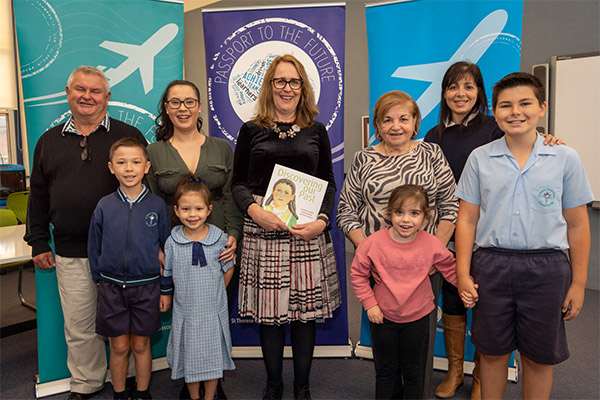 It was during this building period that St Therese’s infamous “tent story” took place.

Discovering Our Past, by author and illustrator Liz Bowring, tells of Sister Hyacinth using a choir loft and then a large marquee as a temporary classroom for her students while construction was taking place at the school.

“This setup would work well until one stormy afternoon, gale-force winds would blow the marquee away causing Sister Hyacinth to rush the heavily rained-on children to the safety of the church,” Ms Bowring writes.

Back to the future

Current teacher Sarah Lennard has been making her own memories at St Therese Catholic Primary School Mascot for 40 years.

She first taught at St Therese in November 1980, acting as a relief teacher for a religious sister taking her final vows.

Back then, Malcolm Frasier was the Prime Minister and Sunnyboy ice blocks were all the rage at the canteen.

“I have taught every grade – some several times,” Ms Lennard said.

“I was also a teacher librarian for several years and I was one of the first teachers to be able to job share.”

“People whom I first met as parents, I now see dropping off their grandchildren; a little boy I am currently teaching, I previously taught his mother” – Sarah Lennard

Asked what’s changed most at St Therese in the past four decades, she emphatically said: “Technology, of course!”

“Knowledge is still knowledge but it is how we access it that has changed,” she said.

“Recently, for example, my Year 1 class and I used our smartboard computer to access my home weather station to compare live digital readings of temperature, wind speed and potential solar energy.

“When I began teaching, we went outside, sat in the playground and discussed the sun and wind. The terms ‘solar energy’ and ‘wind power’ would not have been uttered.

“Today we are also much more aware of individual needs and cater for them, meeting each child at their point of need.

“Having said all that, kids are still kids and the bottom line is that our job is to make sure they love and want to come to school. If we can achieve that, then learning will happen.”